In the tradition of Anglo touring of Italy , we took a fast train on a trip from Todi to Naples. We were already beguiled by several Paulo Sorrentino movies (see Hand of God 2021) and documentaries about Pompeii, so we were both excited and full of anticipation. Doing this at the beginning of summer might not have been the best time (13-23 June) made more uncomfortable by an early start to summer with 34+degree heat- quite hot for walking the streets of a city like Naples - even with a sea breeze around every second corner. 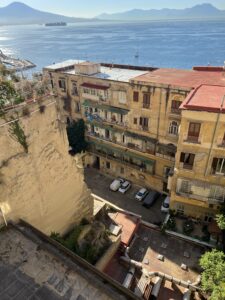 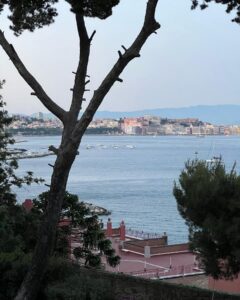 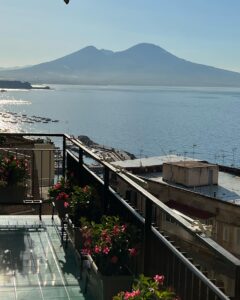 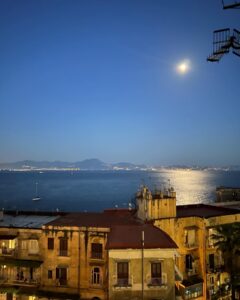 We stayed in a comfortable B&B apartment in Via Posillipo 382 on the northern end of the Bay of Naples with a fabulous view of the bay and Mt Vesuvius in the distance. It was four metro stops from the central station (Mergalina) and a short taxi ride to the apartment. But what a view from the 6th floor! We had a local supermarket within a short walk and private access to the beach across the road. 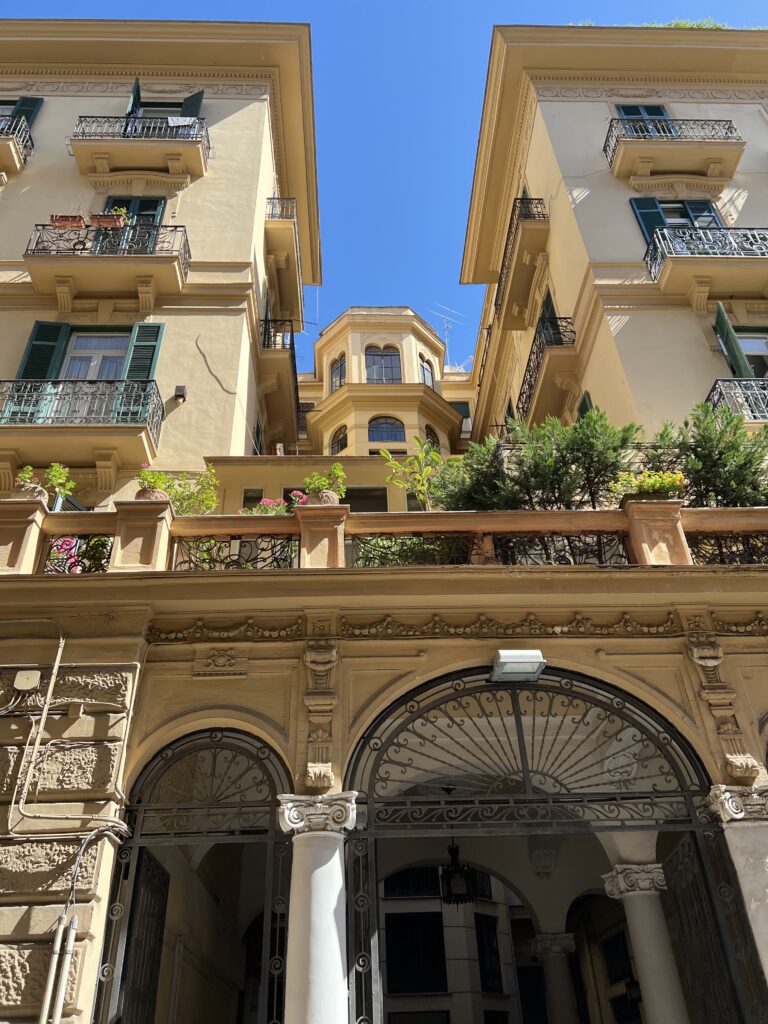 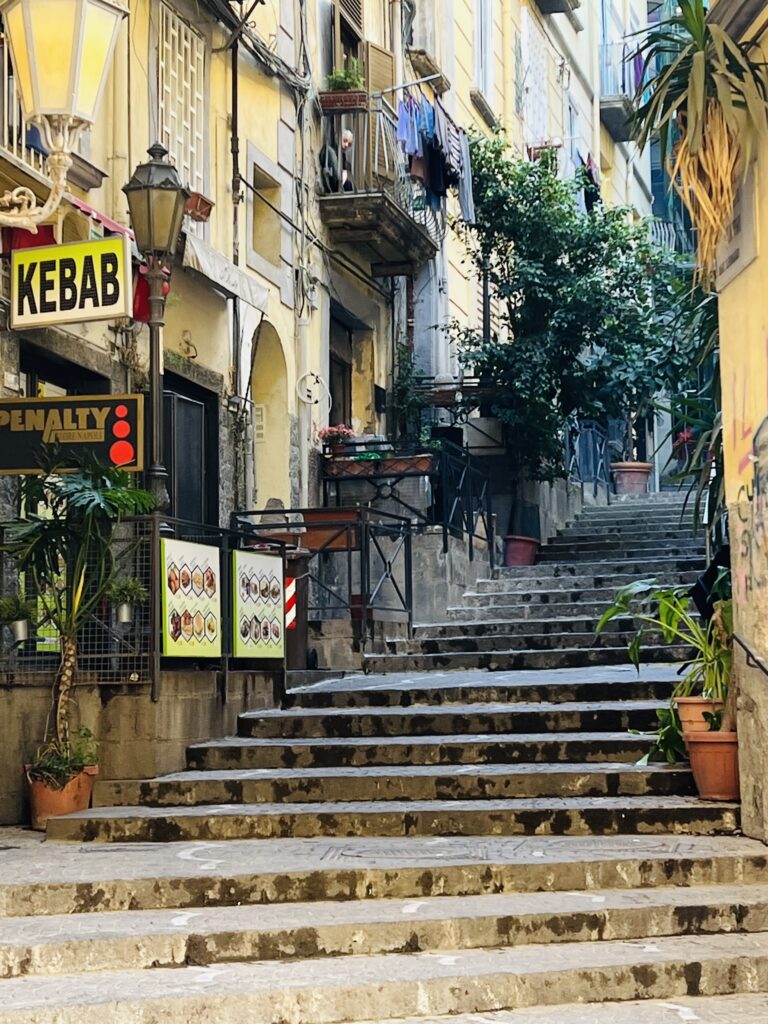 Naples is highly photogenic in a visceral way. It’s not a tourist town as such, although tourists are welcome and catered for, more a town predominantly for the local Neapolitans. As such it seems to lack polish although there is a visual feast served up everywhere you look. 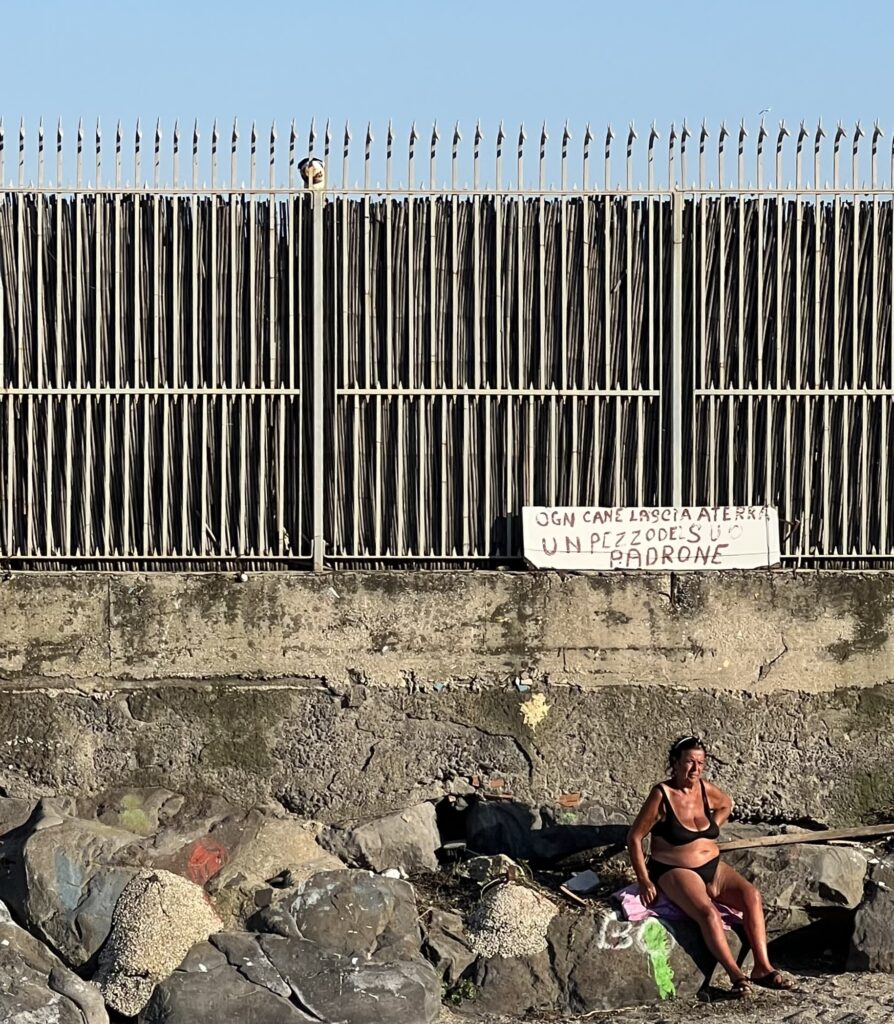 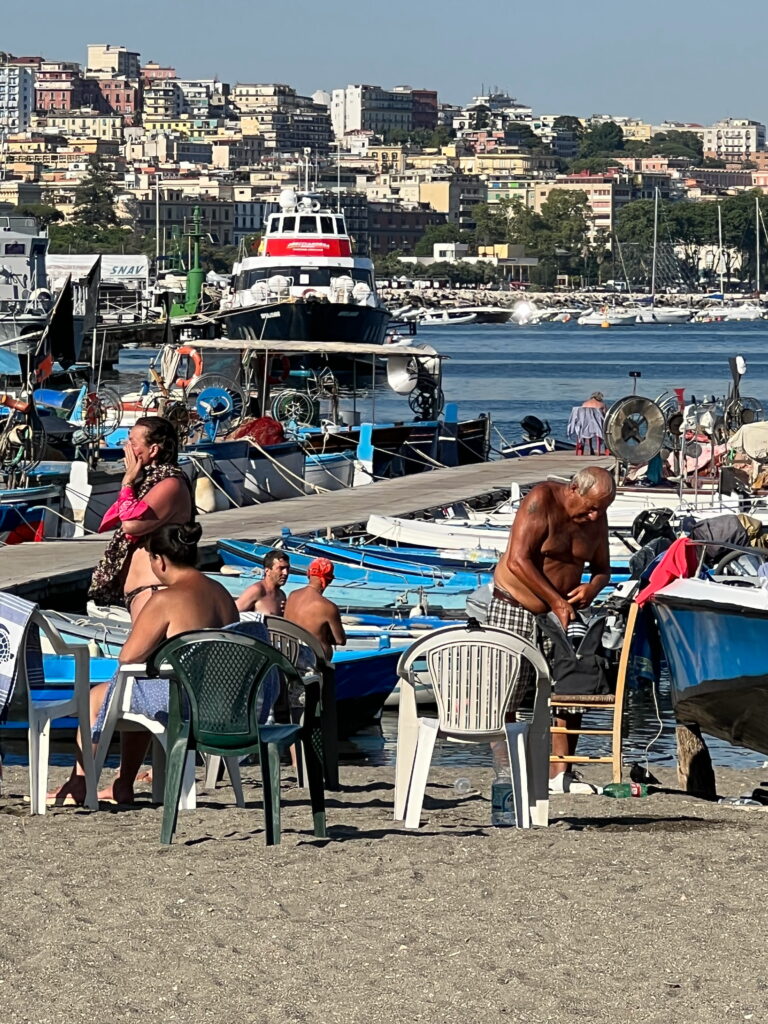 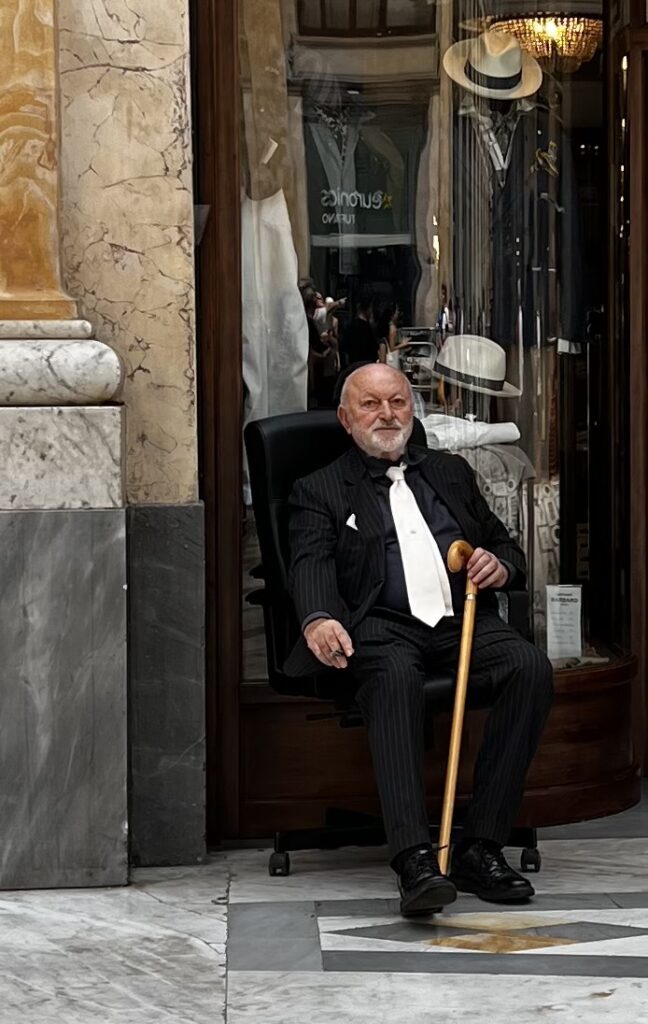 So wandering the streets of Naples is a thing in itself. Shopping is good and there seems to be bargains to be had in via Toledo which borders the western edge of the old part of the town.

Menswear is particularly well represented in this street and the locals present themselves appropriately dressed. As usual the Italians are confident and in Naples quite brassy! No snowflakes in this population. 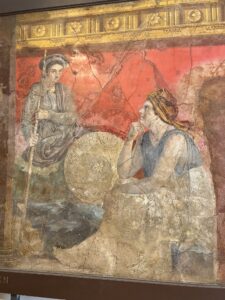 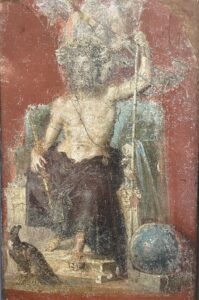 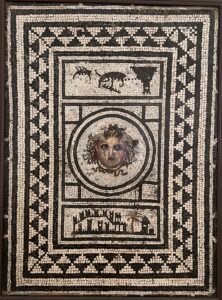 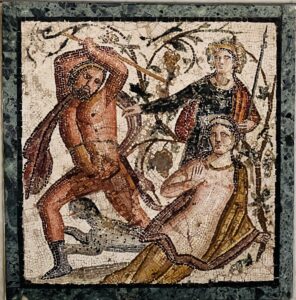 As usual we hunted down the best of the art museums in the short time we had. The Naples National Archaeological Museum was first on our list and what a find! We were tipped off about this venue by an Todi local, Roberto Gobesso, who exhorted us to make the visit. It was well worth the modest entry fee. Cool in temperature inside and very cool in exhibition. It was eye popping and will always be a fond memory.

What was more special was the realisation that would come the following day , that Pompeii has been cleared out of the best of its antiquities and had it placed in this museum for safety and preservation. So the exhibition at the museum was much better, if somewhat intense!!

Pompeii was an easy metro trip from Central station. Going early to beat the heat was everyone’s idea, of course, but entry was easy and pre-purchase of tickets both unnecessary and unhelpful.

Seeing Pompeii first hand was a long held ambition, and perhaps as a result little disappointing.

After about half an hour I wished I had the audio guide, but the streets and ruins were mostly the same. I was , however interesting to see first hand how the class system played out in square feet of habitation. No change in 2500 years! Also the foot paths and road crossings were raised to save walking through water and animal excrement(?). Servants (slaves) lived in smaller spaces 10 sqm two on each side of a door entrance to an open reception area ( with a small pond about 3x3m) 16 metres long and about 12 metres deep. Then the bedrooms (camera), kitchen (cucina) and dining rooms behind. Very standard layout and obviously opulent for the nobility.

Learning about the life of the people and the commercial areas around the piazza would have been interesting, but no more informative that the meany documentaries on Pompeii. 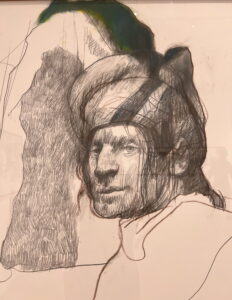 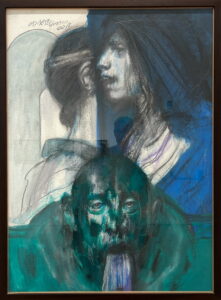 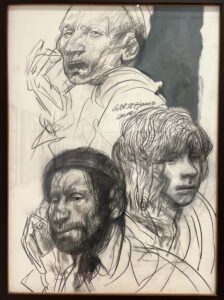 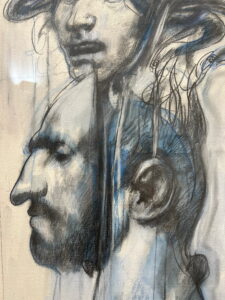 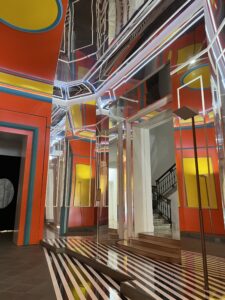 Finally, Donnaregina Museum d’Arte (Madre Museo) highlighted the fact that contemporary art is alive and well in this ancient city. We visited the museum in Via Luigi Settembrini 79, close to Piazza Cavour and the metro.

Permanent works by Sol LeWit, Richard Serra, Amando d’Stefano and Melbourne born Lawrence Carroll impressed with d’Stefano’s work, and particularly his drawings, a standing out for us. He is a figure artist whose drawings are in the style of the masters like Da Vinci; Tiepolo and Raphael.

In short, Naples lived up to its reputation as a cultural centre for art, food and history while at the same time being an authentic Italian City. 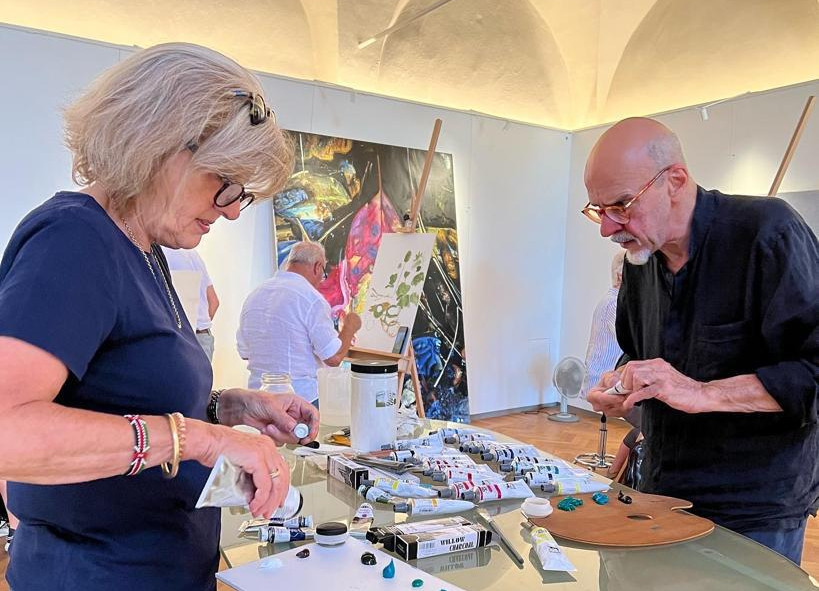 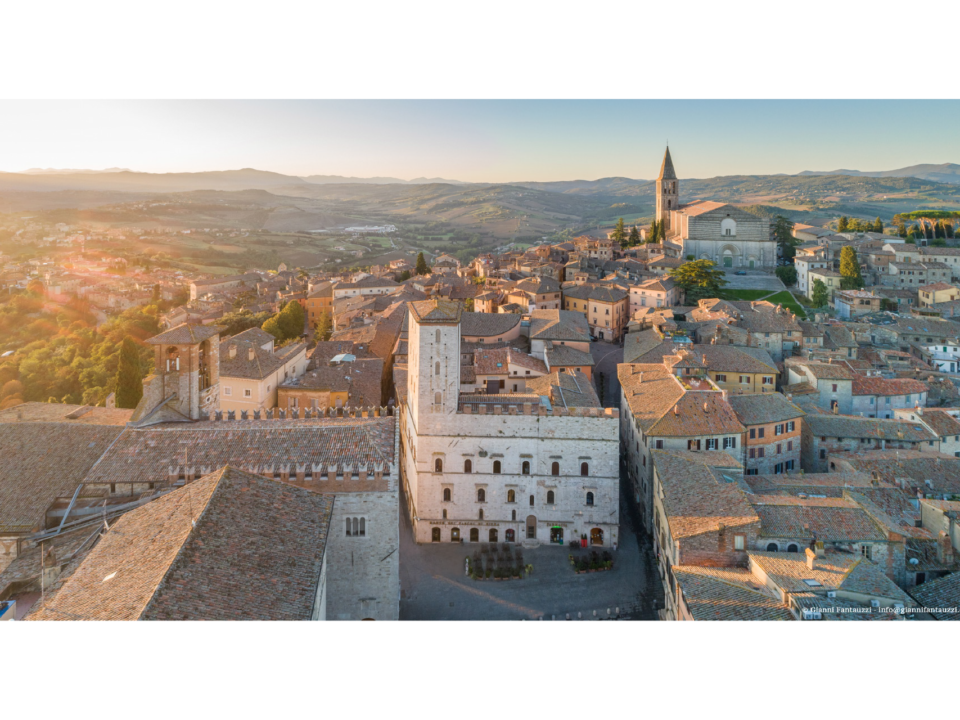 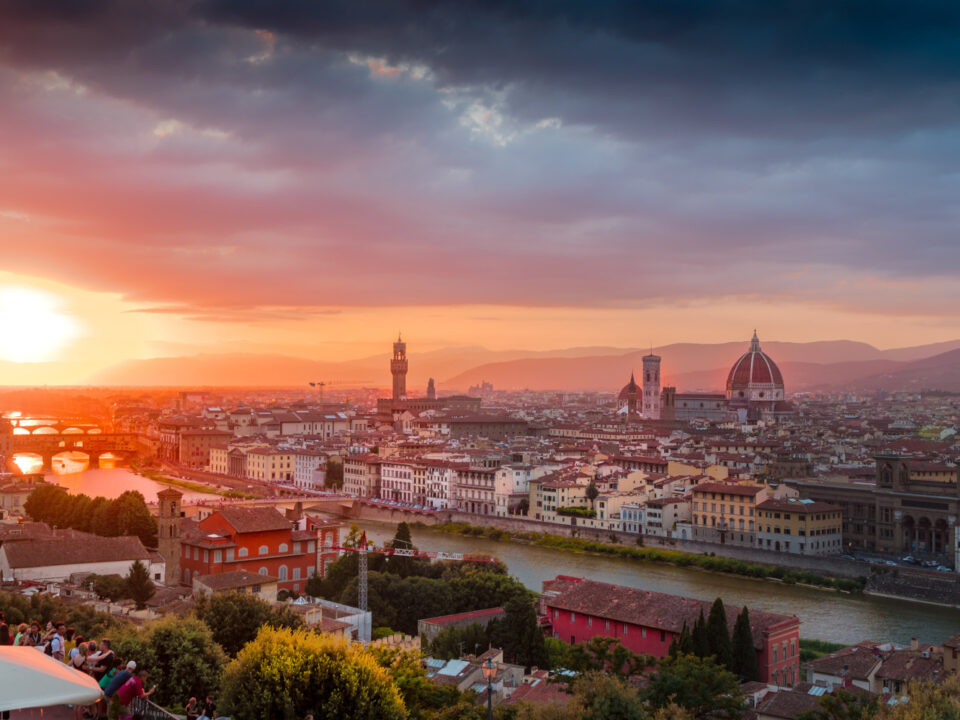